Hey I’m Becky Davis and welcome to my blog. This is part two of my series where I’m talking about Conversion Rate Optimization, Digital Marketing, and applying behavioral science for businesses of every size. I’ll be breaking down the hurdles most business face when looking at CRO — lack of traffic and lack of money — and making this applicable to any business.

This post and the next cover the #1 mistake I see marketers make. Like hands down, not even close. I don’t know what it is. I’ve worked with business leaders who could speak eloquently about their product and the benefits. The minute their hands hit the keyboard, though, jargony, confusing, and inauthentic copy came out.

I actually sat with someone who was struggling to create good copy, talked to her about the product, and wrote down what she said and put it on her website because what she was saying was so good. She just wasn’t writing the way she talked. Something about typing just makes it come out strangely.

When it comes to communicating with targets, there are a myriad of mistakes I see even professional copywriters make. And it hurts to see them. So let’s stop torturing our poor prospects and talk about how to engage.

Quick disclaimer, this assumes you already know your ideal customer. We’ll get to ways to validate those assumptions and create a firm foundation in future videos.

First up, clarity. You need to describe your product or service in a way that is clear, engaging, and appealing. In a short couple sentences or maybe even less. Nothing is more frustrating than making me work to figure out your product. Here’s some actual copy I’ve run into:

Any idea what their product is? Let’s not even take about value prop or differentiator.

And this one? This is a bit deceptive because the sub headline tricks you into thinking they’re actually conveying meaning. “Bring your social mission to life”. But once you consider it for a moment, it’s just as meaningless as the headline, because I still don’t know what their product is or what problem they’re solving. It’s vague and fluffy.

Plus this is switching the subject of the sentence without any reason or warning. In the headline they are telling the reader to “harness the power of goodness,” whatever that means, and then talking about themselves in the sub headline. Both without mentioning the subject in the sentence. Things like that just make it harder to read.

Slightly better, as long as I know what AEM is. You could also remove “learn how” entirely. The headline is a complete waste, though. It’s vague and not specific enough to convey value.

Clarity. Make sure the reader can figure out exactly what you are offering without having to think about it. Here’s my rewrite for that last one:

The “today/tomorrow” phrase uses a very common trope to evoke the idea of investing today for something tomorrow.

“Optimal” is a trendy term, especially with quantified self and biohacking gaining mainstream attention. Tim Ferris uses it in his podcast intro. It’s “cool” and “interesting”.

“Stronger” is pretty easy to get from years of branding by sports companies. I added “resilient” there since it’s a less defined concept to relate to “stronger” and tie back to the “today/tomorrow” trope.

Think about patterns like a shortcut. If we didn’t already have preconceptions around these terms then I would have had to explain exactly what I meant by them. But by leaning on those I was able to create meaning and ideas beyond the face value of the words I chose.

Then keep it to biteable chunks of information. There are two ways I could write the last sentence:

With the world’s most advanced biometric system, be stronger and more resilient.

Be stronger and more resilient with the world’s most advanced biometric system.

The first one doesn’t read as easily because you have to keep the concept of “what does the world’s most advanced biometric system do for me?” in your mind as you read the next piece of the sentence. In the second one, there’s a complete concept. “Be stronger and more resilient”. Done, that’s a concept, it’s resolved.

Then I introduce another, “the world’s most advanced biometric system.”

Since you already have the resolved concept of being stronger and more resilient, you aren’t trying to keep an unresolved idea in your head while reading the next idea.

If I really wanted to put the system concept first, I could achieve the same thing by saying something like “This is the world’s most advanced biometric system. Use it to become stronger and more resilient.” But that doesn’t really roll off the tongue.

Another misstep in three out of those four examples:

They’re talking about themselves instead of their target. Use “you” rather than “we”, “they”, or “their”. Tell the target what they are doing or getting or the problem they need to solve. Basic fact, people like hearing about themselves.

Don’t tell them what you do and make them translate it into how that relates to them. Instead just start there; tell them how it relates to them. The copy will probably shift to more action oriented and driving on it’s own that way when you do. So, bonus!

Let me dissect my current headline:

Right away you know exactly what I’m offering. I’m offering to increase your engagement and conversion. Next concept: how I’ll do that. I’m not telling you how I’ll optimize everything for you, just that I will. You get into the body copy to find that out.

And that’s your headline. Click to go to the next piece on optimizing your copy. 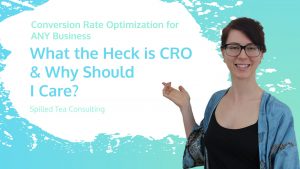 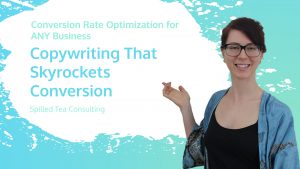